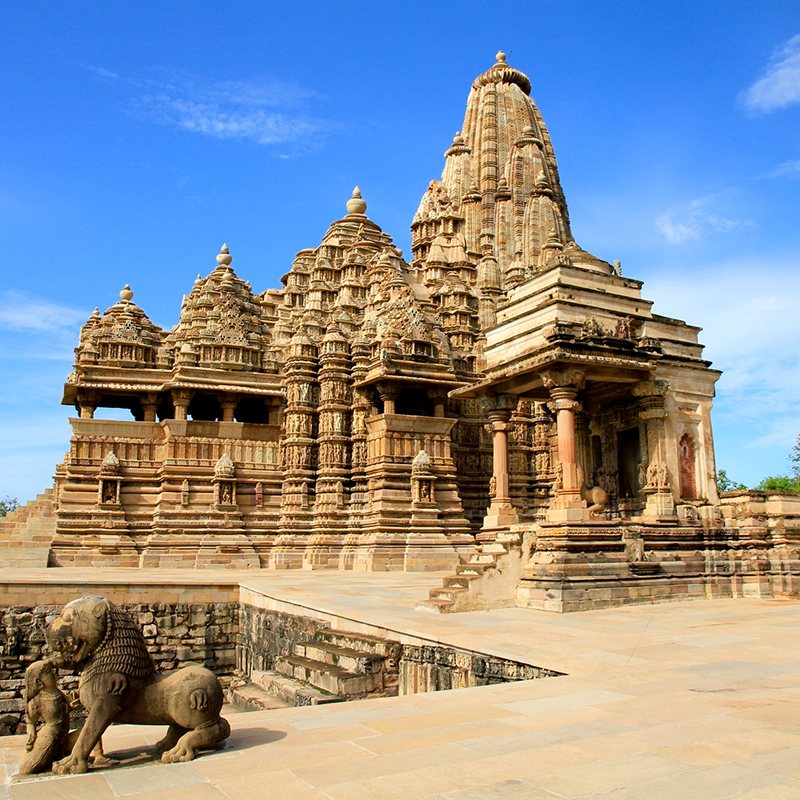 The city of Khajuraho dribbles with historic interest and is a treasure trove of masterpieces delivered by human imagination.This city of medieval marvels wooes swarms of travellers and history enthusiasts every year.The city is home to the largest group of Hindu and Jain temples and suggests a tradition of acceptance and camaraderie amidst diverse religious beliefs.Hence, deservedly acquires a spot among the “Seven Wonders of India” and is rightfully labelled as a World Heritage Site by UNESCO.

It is believed that as many as 85 temples were erected by 12th century out of which only 25 survived the destruction and disfigurement by invaders and nature.These architectural marvels were fabricated between 950 AD to 1050 AD by the rulers of Chandela dynasty, where each Chandela ruler commissioned at least one temple in the complex. Enclosed by a wall with 8 gates each flanked by 2 date palm trees on either side, the city gets its ancient name “Kharjur Vaahaka”. Where “Kharjur” stands for date palm, and “Vahaka” stands for bearer, in Sanskrit. The city has also been addressed as “Jejabhukta” in many texts.

These complexes are a gorgeous exhibition of Nagara style architecture, made out of sandstone and granite.Some of the major charms include, ‘The Kandariya Mahadeva Temple’ with the marble Shiva Linga in the sanctum installed by ‘Raja Dhandadeva’.One of the most famous temple and actively worshipped temple in the group is ‘Matangeshwar Temple’ with Shiva as the presiding deity.The ornate ‘Chausath Yogini” temple is the oldest with 64 deities of Goddesses in the sanctum.A noteworthy shrine among the group is the “Chaturbhuja Temple” which is the only complex not facing The Sun.

These structures are a glaring evidence of the rich legacy we’ve received from our ancestors.Indeed, the city of Khajuraho will accord you a joy ride as you wander through the lanes of our stellar past!